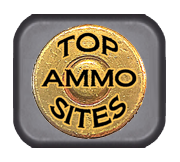 Sponsors of this website are listed and ranked here among other ammo websites in our Top Ammunition Sites Page and locations throughout the site.

Sponsors Stick to the top of Top Ammunition Sites lists throughout the site and are ranked among other sponsors. The Blue Lightning Bolt symbol behind website listings indicates that site is a sponsor. Most when they provide it, also have their own dedicated xml/rss feed page such as the current top site at The Lucky Gunner In Stock Ammunition Feed Page. These feeds are monitored and ISAOTP sales and discounts are made to the Ammo News Feed as community posts by the Administrator as well as Affiliates. If you are a merchant looking for an example of output for best success, they are a model to emulate, both in their feed and Lucky Referrals Program.

Sponsors here do not pay just to be listed and never will! They only pay when a sale is made AFTER visitors click through and actually make a purchase at their website. A commission of 3-5% is then made for that sale. The firearms and ammunition friendly affiliate marketing experts at Avantlink manage this perfectly for us as a third party system for large online retailers like those found below and on Top Sites Home. More and more are now developing their own programs to eliminate “middle men” and becoming first party affiliates using programs like Post Affiliate Pro.

What is Affiliate Marketing and How Does it Work?

I will admit, when affiliate marketing first became popular, everyone had their own system and it was a pain in the butt as a publisher because there were so many systems to learn and they changed constantly! I definitely preferred third party programs then because they were trying to build tools that worked across the board. Integrations between multiple sites was easier when one system had multiple merchants.

That has now dramatically changed in our industry with systems like Post Affiliate Pro becoming available to merchants. First party affiliation is where merchants create their own affiliate marketing program like Lucky Gunner and their Lucky Referrals Program using software created by Post Affiliate Pro. Publishers like you and me join with them directly. After account approval, we learn to use their dashboard, create and share our own custom links and bang! We make 3% commission on every sale! On top of that if they allow it, we even make 1% commission on anyone who we refer to their program! When someone who signs up for their program through your referral link sells ammo, they make the 3% commission and you make money 1% too! That is the true benefit and what affiliate marketing is all about! And you can have countless sub-affiliates!

Large retailers who just don’t want to mess with it partner with third party networks like Avantlink, Commission Junction and those like them because it’s just more hassle free. It is although difficult for merchants to get approved because the standards at these huge programs are very finicky and the customer service levels may not be as high as you might expect.

Click to Vote Daily For Top Ranked Ammunition Sites Below